Lotus Fortress is an Outpost in Biomutant. Lotus Fortress belongs to the Lotus tribe. Outposts act as bases of operations for the tribal warriors and showcase their control of the territory. Players can conquer and capture the Outposts of a rival Tribe in order to gain favor with their own, unlocking various benefits.

By capturing Lotus Fortress you'll gain favor with your tribe master, as well as unlocking the Merchant services of the Outposts.

The following Merchants can be found in Lotus Fortress:

The following NPCs can be found in Lotus Fortress:

How to capture Lotus Fortress

There is an Army of soldiers of your tribe waiting for you at the gate of the Fortress. Talk to your Sifu at the higher platform.

An Element of Surprise

You can choose what to do with their tribe. 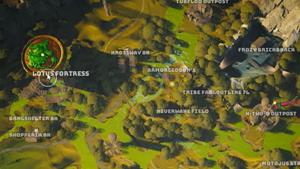