Netra Fortress is an Outpost in Biomutant. Netra Fortress belongs to the Netra tribe. Outposts act as bases of operations for the tribal warriors and showcase their control of the territory. Players can conquer and capture the Outposts of a rival Tribe in order to gain favor with their own, unlocking various benefits.

By capturing Netra Fortress you'll gain favor with your tribe master, as well as unlocking the Merchant services of the Outposts.

The following Merchants can be found in Netra Fortress:

The following NPCs can be found in Netra Fortress:

How to capture Netra Fortress

You approach the Area you will find an Army of soldiers of your tribe, the Sifu will tell you that the plan is to fling you over the wall with a Slinglobber, and he wants you to secure a hardhat first. 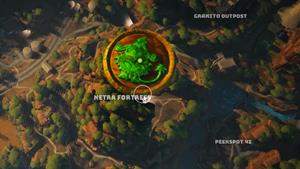