Urfidurf Outpost is an Outpost in Biomutant. Urfidurf Outpost belongs to the __tribe__ tribe. Outposts act as bases of operations for the tribal warriors and showcase their control of the territory. Players can conquer and capture the Outposts of a rival Tribe in order to gain favor with their own, unlocking various benefits.

By capturing Urfidurf Outpost you'll gain favor with your tribe master, as well as unlocking the Merchant services of the Outposts.

The following Merchants can be found in Urfidurf Outpost:

The following NPCs can be found in Urfidurf Outpost:

How to capture Urfidurf Outpost

This outpost is very simple to conquer, to enter the outpost you have to simply interact with the gate. You may convince the tyrant through the correct dialogues to give up the outpost peacefully, but if you don't he'll tell you to fight their Titan. If you win, the outpost is yours.
The Rival Titan is easy to defeat, it will fight alone and you will be accompanied with some members of your tribe. Keep distance, keep on moving and keep shooting, it should be easy to defeat. 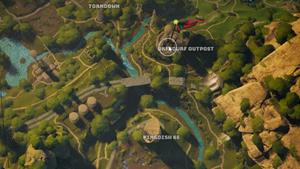